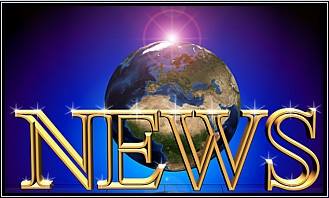 Soon, MAIF is Proud to launch its dynamic on-line "News Magazine" focused on the Martial Arts - its Activities and the People in the Martial Arts World...
The "Martial Arts News" (MAN) will be cover the Martial Art Events, with Schedule, Announcements and Reports as well as Photos, Interviews and More..!!  Stay Tuned...

London Jr. & Sr. Open Championships, 4 March 2018
​The event is jointly organized by the Federation of Traditional Judo of Italy (FIJT) and Judo For All UK (JFAUK) under the auspices of World Judo Federation (WJF) that has enshrined the very concepts of Traditional Kodokan judo and “judo for all” in its founding documents. The seminars, courses, and the contests planned by the organizing committee will be conducted under the guidance and recommendations of the European Technical Committee in adherence to the concepts of Traditional Kodokan Judo. The organizing committee invites all members of MAIF and other judo formations supportive of the principals laid down by Professor Jigoro Kano to join us in Jesi (Ancona), 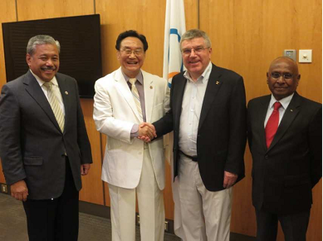 TAFISA and IOC Presidents Meet in Malaysia..
​On the occasion of the 128th IOC Session in Kuala Lumpur, Malaysia, TAFISA President Juho Chang met with the President of the International Olympic Committee (IOC) Dr Thomas Bach on July 27. The IOC and TAFISA have been cooperating on various projects such as the Certified Leadership Courses (CLC) or the Sustainable Health programmes supported by the IOC. The IOC President stated the need for strengthening the social role of sports and asserted the significance of TAFISA’s role. As came the subject of the Olympic Agenda 2020 TAFISA took the opportunity to submit the document “TAFISA’s Contribution to the IOC Agenda 2020”, designed in accordance with the 40 Recommendations of the Olympic Agenda 2020.  The meeting was joined by Sam Ramsamy from South Africa, IOC member and Chairman of IOC Commission on Sport and Active Society. The Chairman of the 6th TAFISA World Sport for All Games Isman Hayono then presented the Games and personally invited Thomas Bach to attend the even in Jakarta, October 2016 . The IOC President underlined that the Games' motto “Unity in Diversity” matched the values of the Olympic Agenda 2020. This meeting confirmed the longstanding partnership between both organizations and IOC’s recognition of TAFISA as the leading global Sport for All organization. 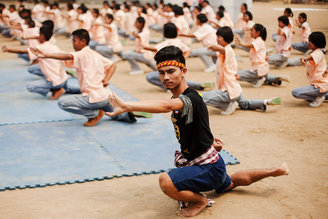 Old Art, New Title..
Muay boran is an ancient, unarmed martial art that forms the basis of muay thai boxing, the national sport of Thailand. Muay boran entails strikes with eight contact points (hands, elbows, knees and shins), grappling sweeps and throws. In March, the World Muay Boran Federationconducted its first world championships in Ayutthaya, Thailand, despite political unrest in the country. Scores of muay boran practitioners, from 17 countries, scattered along the banks of the Chao Phraya river to learn from grandmasters. The rules governing each bout depended on the age and weight of the participants, but all fighters wore protective head, chest, elbow and shin guards. The cadet division prohibited punches or kicks to the head. The youth and senior divisions featured full-contact bouts. “This tournament is important because people only see bad information in the news about Thailand,” said Chinawut Sirisompan, a grandmaster. After months of blockades and marches punctuated by light urban warfare, the image and the economy of Thailand had suffered. But the martial artists and guests at the world championships seemed unfazed. “This is my first time in Thailand, and I think it’s beautiful,” said Ryan Robertson of Manchester, England, whose 12-year-old son, Royce, won a silver medal in the male cadet 35-kilogram division. “I will definitely come back again.” 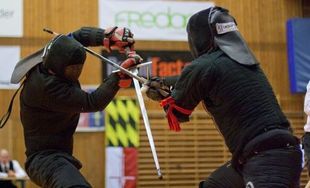 Is Jousting the Next Extreme Sport?
A hotel ballroom in Ellicott City, Md., seemed an unlikely setting for a four-day competition involving ancient martial arts, Longpoint. ​“Fight!” the referee called out. Axel Pettersson, 29, raised his sword above his head and waited. When his opponent drew near, the two exchanged a rapid set of blows. At last, Pettersson landed a vicious cut across the torso of his opponent’s body armor, winning the open steel longsword competition and adding another championship to his collection. Longpoint, held in July, is one of several annual tournaments around the world, manifestations of renewed interest in what enthusiasts call historical European martial arts, or HEMA. It includes events like grappling — similar to Greco-Roman wrestling — and several types of swordfighting. But the focus is on the most iconic medieval weapon, forged from cold, lustrous steel: the longsword. “The longsword specifically is just very accessible,” said Pettersson, a management consultant from Gothenburg, Sweden, “because that is what the old masters wrote about the most. It was called the ‘queen of weapons’ in the old days.” Unlike re-enactors or role players, who don theatrical costumes and medieval-style armor, Longpoint competitors treat swordfighting as an organized sport. Matches have complex rules and use a scoring system based on ancient dueling regulations. Fighters wear modern if sometimes improvised protective equipment, which looks like a hybrid of fencing gear and body armor. They use steel swords with unsharpened blades and blunt tips to prevent bouts from turning into death matches. Skill and technique, rather than size and strength, decide the outcomes. Fights are fast and sometimes brutal: Essential to the art is landing a blow while preventing an opponent’s counterstroke. Nevertheless, even the best swordfighters earn large bruises in the ring, which they display with flinty pride. Longpoint began in 2011 with 60 participants; now the largest HEMA event in North America, it drew about 200 this year. The open steel longsword division had 55 entrants, eight of them women. A newcomer, Katy Kramlich of Oshkosh, Wis., placed second among the 15 competitors in the women’s steel longsword division. She began studying the longsword a little more than a year ago, at the suggestion of her fiancé, and was skeptical at first. “In my mind it was something very different than what it is,” said Kramlich, 24, who works in sales and marketing. “I was picturing dressing up, and fake swordfighting. I just wasn’t interested. I finally went to one practice, and I haven’t looked back since.” At Longpoint, participants rushed between rooms for bouts and classes on ancient fighting techniques. Study is central to HEMA’s identity. Many ancient swordfighting documents have been collected online, helping to forge a community out of an esoteric pastime. The most extensive collection is at Wiktenauer.com, a portmanteau of “wiki” and the surname of a (possibly apocryphal) medieval swordmaster, Johannes Liechtenauer. As many manuscripts were written in Middle High German or Middle Italian, HEMA enthusiasts trace two main lineages for their art: the German school and the Italian school. Debates about which system is superior can become heated. “To me, the German system is magical,” said Jake Norwood, a 36-year-old former Army captain and Iraq veteran who works as a security consultant. “There’s something beautiful about it. There’s a beauty in the movement that I think is stripped from the Italian system, which in some ways is more practical, but also less exciting.” Norwood tried other martial arts and sport fencing, but the longsword captivated him. He has been a driving force behind Longpoint, which he called “a giant nerd-fest.” “You’ll see a lot of beards,” Norwood said. “It’s a kind of prep-school-meets-biker-gang vibe.” 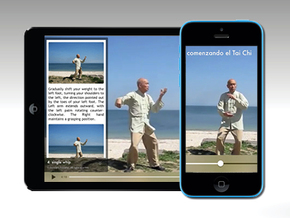 New APPs for learning Martial Arts..
​‘Karate’ Means Empty Hand, but a Handheld Device Is Needed?
LEARNING a martial art is a true challenge, both mentally and physically, because there is so much to master and remember. Turning to an app for help might not seem like an obvious course, but many apps do provide worthwhile support. Brazilian jujitsu, which largely focuses on ground fighting, is quickly gaining in popularity, and one of the most popular styles, the Gracie Barra Brazilian Jiu jitsu, has some particularly strong apps. They include videos that document techniques like defenses and escapes. Each video is performed by experts and filmed from different angles so you can see exactly what’s going on. There’s also narration about the moves, and the video pauses at key points. These videos supplement what you learn in person, and they are part of a 16-week course that gets progressively more complex. As teaching supplements, the apps will certainly help you brush up on techniques, but apart from the videos there’s not much content. The apps are also expensive. One on iOS costs $15 for the first four weeks, and the remaining three apps are $10 each. A great alternative jujitsu app is iBJJ, which is $4 on iOS and Android. Instead of video, iBJJ relies on still photos that you can scan through in the style of a flip book. The app makers say this is to help you see the techniques at your own pace, instead of at the forced pace of a video. The photos have descriptive text, and there’s also an option to see frames from a reverse angle to better illustrate the way the body should be positioned. The iBJJ app is easy to navigate, with techniques broken down into categories like “top guard” or “back attacking.” The flip-book teaching style may suit beginners, while serving as an encyclopedia of moves for more experienced practitioners. And the app has plenty of content.Karate practitioners may appreciate the app Learn Karate by Fitivity. This app, which is free on iOS and Android (where it’s called Karate Training instead) could be a useful practice resource. In addition to lessons on karate techniques, it has sections on how to keep flexible and build strength. It also has a section for the many katas, or symbolic attack and defense postures that practitioners must learn. The lessons include videos as well as still photos and descriptions of how to move. Over all, it’s a nicely designed app with a professional feel that tries to please beginner and expert karateka alike. Though the basic app is free, higher levels require an in-app payment of $5. Taekwondo is another popular martial art, with Korean origins. Unlike many of its rivals, Taekwondo Bible, a free Android app, has been frequently updated, which means it may run better on your device. The app contains detailed instructions on how to practice the patterns, including diagrams on how to place one’s feet, and it even includes explanations of what the Korean names of the moves mean. It’s straightforward in design, and looks good — a nice contrast to many Android apps. However, while the first five taekwondo patterns in the app are free, you have to pay for the full list. On iOS there are surprisingly few good taekwondo apps, but Taekwondo White Belt is a free app that has been recently updated, a nice sign that its developers are paying attention. Taekwondo White Belt is aimed at beginners, and it describes some of the history and philosophy of this martial art. It also has detailed instructions that explain many taekwondo techniques using photos, text and video. It’s easy to navigate this app, which offers more advanced moves as you go, and its design is simple and frill-free, which may keep you focused. But clicking through the different sections of the app takes time, and sometimes menus feel unresponsive. In addition, only a few lessons are free — the full content costs $1. Tai Chi is another a martial art, though you might think of it as a slow-moving health-based activity. Yang Tai Chi for Beginners is a comprehensive iOS and Android app for learning one of the more popular forms of Tai Chi. It uses video-based lessons to talk you through the precision movements of the form. The video demonstrations are backed up with text-based instructions and explanations of correct posture and what the movements are for and what they mean. The app has a short sample of its content available free, but the full content requires an in-app payment of $10. There’s also a second app that completes the lessons.